Sara McMann is a pioneer on many levels.The 37-year old UFC Bantamweight (11-5) was the first American woman to win a Silver medal in the 2004 Summer Olympics. She was one of the first women to fight in the UFC, debuting in 2013. She is also a member of an exclusive club of fighters are also moms.

WMMA Rankings recently spoke with the former title challenger to talk about her career, her life philosophy, and motivations.

McMann says that circumstances in her early life that led her to becoming a world-class athlete at the highest level of competition:

“The main thing that helped me to succeed at being an athlete is having to adjust to new living situations. We moved a lot when I was growing up, and that helped me to change and adapt on the fly. Also, I had a brother in my life that wrestled every weekend. I was always going to tournaments, so I was always around athletics. It was a natural progression from watching my brother to becoming a wrestler.”

After winning a Silver Medal in 2004 in Athens, McMann continued to compete in international wrestling competitions. Then, she transitioned to submission grappling competitions to test herself.

“I knew I wasn’t done with competition after I retired from wrestling. I thought I would go into Jiu-Jitsu, and I always enjoyed the striking sports. But someone suggested that I try MMA, and I enjoyed it. When I hit someone for the first time, it was weird and it took a while for me to get used to the mechanics of striking. I was terrible at it at first. It took a while to get used to, but then I began to enjoy it.”

McMann began her professional MMA career in 2011, submitting Christina Marks via rear-naked choke. From there, it was full speed ahead. McMann fought her way up to being one half of the headlining attraction in the second ever event at Invicta Fighting Championships, where she defeated veteran Shayna Baszler by unanimous decision. Her next fight was her UFC debut at UFC 159, where she continued her winning ways and defeated Sheila Gaff by TKO.

One of the more active fighters in the bantamweight division, McMann has faced whoever was put in front of her. To date, what moment in her MMA career has affected her the most? The answer is a hard-fought contest with a future bantamweight champion at UFC 183.

“My fight with Miesha Tate. I went into the fight with an injury. I could have pulled out of the fight or retired during the fight. I had to dig deep to continue . Sometimes people participate in sports because it’s habitual, but when you run into adversity, it tells you how much you want to do it. I found out how much I wanted to fight when I could have given up, but I didn’t.”

With sixteen pro fights, McMann has gained a wealth of experience. She points out the reality of being a high-profile athlete:

“Sports and athletes are glamorized. The truth is that I only compete two to three days a year. The rest of the time is weightlifting, training, and a lot of hard work that most people don’t see.”

McMann’s favorite fight of her career was another tough fight with another fellow grappler:

“The fight with Alexis Davis. I was one hundred percent surprised to get a submission against someone of her caliber. Everyone knows she a great jiu-jitsu player. The plan was to keep her on the feet for longer than we actually did.

It’s amazing how she loves to stand in there and bang. If you remember the fight, she hit me so hard that part of my face went numb. My face stayed numb for a month and a half. The reason that this is my favorite fight is that I love facing adversity and overcoming.”

As mentioned earlier, McMann is a fighter-mom, along with other fellow fighters such as Cat Zingano, Yana Kunitskaya, Bec Rawlings, and Alexis Davis to name a few. Do the two roles ever bleed into each other? 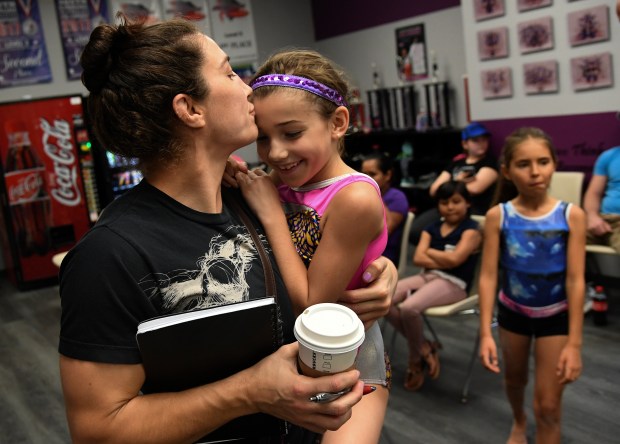 “Explaining to my daughter about wins and losses and about mental toughness helps me as I’m explaining it to her. I’m trying to teach her to be a strong little woman.  I want her to learn about life and how to overcome adversity. She sees me all the time – times when I’m hurting and when I don’t want to train. As she sees me move forward through life’s difficulties, I hope that she can learn from watching me and do the same.”

Finally, McMann would like to send a message to not only MMA fans, but sports fans in general:

“They should remember two things.

1)     How things look are different than how they feel.

2)     When you post or write something about or to a professional athlete, they need to remember that they are talking to a human being that are doing what they love to do.

I don’t experience it much myself, but I see the things that people post about my teammates on social media. I see them post nasty things not only about them, but about their children, their spouses, and significant others. If fans would remember that these people are human beings, they wouldn’t act so shitty. If you were standing face to face with these athletes, you wouldn’t say those kind of things. People who do these kinds of things are not real fans, and are not celebrating the sport.”

Sara McMann would like to give the following shoutouts:

“My teammates at Team Alpha Male – They work really hard and support and encourage each other.    And my coaches – Jimmy Fowler, Phil Nurse, and Urijah Faber. “