“If you can’t dream big, ridiculous dreams, what’s the point in dreaming at all?” — Ronda Rousey

Whether you love her or hate her, Ronda Rousey is an icon. She is a trailblazer in the sport of MMA. Not only did she pave the way for a woman in the UFC but she elevated the sport of MMA to a new level. With her history-making Hall of Fame induction, here are is a look some of the key parts of Rousey’s legacy.

FEB. 1987 – FIGHTING OUT OF…
Ronda Jean Rousey is born in Riverside, Calif., to AnnMaria De Mars and Ron Rousey.

2008 – BEIJING OLYMPICS
A 21-year-old Ronda Rousey wins bronze and becomes the first American woman to earn an Olympic medal in judo. She competed in the 154-pound (70kg) division.

JAN. 2011 – “WOMEN WILL NEVER FIGHT IN THE UFC”
UFC President Dana White famously tells TMZ that women would never be allowed to fight in the UFC.

MAR.2011 – PRO MMA DEBUT
Following a 3-0 amateur career, Rousey makes her professional debut at King of the Cage on March 27th against Ediane Gomes, winning by armbar in 25 seconds.

NOV. 2011 – THE TREND CONTINUES
Between March and November of 2011, Ronda rakes up four wins all by way of first-round armbars. Her competition included Charmaine Tweet, Sarah D’Alelio, and Julia Budd.

MAR. 2012 – WOMEN ON THE RISE
Announced as the headlining fight, Ronda Rousey and Miesha Tate exchange words at a Strikeforce press conference. This fight was the first time in three years that women headlined a Strikeforce card. The fight, and WMMA, begin to gain popularity and more media coverage.

FEB. 2013 – BREAKING THE GLASS CEILING AT UFC 157
Ronda Rousey and Liz Carmouche make history by becoming the first ever women to compete in the UFC. She submits Carmouche in the first round and is the first ever UFC women’s bantamweight champion.

DEC. 2013 – THE RIVALRY CONTINUES
Rousey and Miesha Tate fight for the second time, this time for the UFC bantamweight title. Tate takes Rousey into the third round but is eventually arm barred.

AUG. 2014 – THE BIG SCREEN
Ronda appears in “The Expendables 3”– the first of many movie and television roles.

MAY 2015 – ‘MY FIGHT, YOUR FIGHT’
Ronda releases life memoir. The book is co-written by her sister. The next month, ‘My Fight, Your Fight’ makes the New York Times Best Sellers List.

AUG. 2015 – ROUSEY VS HOLM ANNOUNCED
Ronda appears on ABC to announce her next opponent: boxing champion Holly Holm. The bout was originally scheduled for UFC 195 but is later moved to 193.

NOV. 2015 – THE KICK HEARD AROUND THE WORLD
UFC 193 is the first time a PPV card is headlined and co-headlined by women. The PPV breaks attendance records in Sydney, Australia. Holly Holm defeats Ronda Rousey via stunning head kick knockout in the second round. 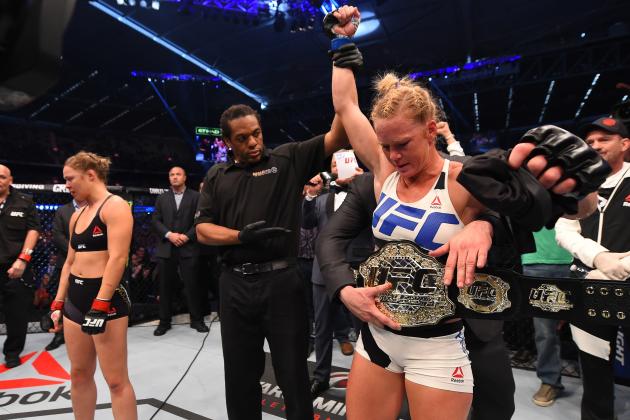 JAN. 2016 – SNL AND ‘THE RING’
Rousey hosts Saturday Night Live. This is her first public appearance since the fight and she briefly speaks about the Holm loss for the first time. She also becomes the first mixed martial artists and the second woman to ever land the cover of “The Ring” boxing magazine.

FEB. 2O16 – THE ELLEN SHOW
Rousey appears on ‘The Ellen Show’. She makes headlines when she reveals she contemplated suicide after losing to Holm.

JAN. 2018 – THE ROWDY ONE
Rumors are confirmed to be true when Ronda appears at WWE’s Royal Rumble PPV. She is signed to a full-time WWE contract. Her attire is inspired by “Rowdy” Roddy Piper and she dons his actual leather jacket, given to her by Piper’s son, during her entrance.

JULY 2018 – HALL OF FAME
Ronda is recognized for her achievements in the sport. She becomes the first woman to be inducted into the UFC HOF.

What are your favorite moments from Rousey’s career?

We provide official World MMA Pro Rankings in all divisions Atomweight to Heavyweight.