A lot has changed on the women’s scene in the last 12 months, more specifically in the flyweight division. Major MMA promotions around the globe have been getting on board with 125, including KSW, Bellator MMA, the

UFC, Cage Warriors FC and One FC. All five have crowned champions in the category recently, with KSW leading the charge. The change in attitude towards the flyweight competitors has resulted in opportunities for veterans and prospects alike.

“My first professional fight was against the best in Colombia at that time and I prepared a lot for the fight. It made me realize that fighting was my passion and I enjoyed every bit of it. It was a great experience.”

Her second fight was just as difficult, facing the 8-0-0 Reina Cordoba in her next outing.

“She is a really strong fighter and I knew it would not be an easy fight but it was a great fight! I gave it all that I had and she did as well. I had the opportunity to control her more standing up and in the ground. I had a couple of great positions, but she defended well.”

With her second win over a ranked opponent Mazo’s team felt she was ready for the next level.

“My manager is the one who contacted LFA and we started working with them. I love them. They are one of the best.”

WMMA has enjoyed a massive growth in popularity over the last five years. Before that time most major promoters were not interested in promoting women’s bouts. The casual fan was not exposed to the athletes of WMMA, and media was resistant to the idea of covering the contests when they did take place. In 2018, the landscape looks a lot different. For Mazo, the experience has been a good one.

“In general, I have been treated well. We are living in times where women are doing things that were not usual.”

There was a year and a half of inactivity between the fight with Cordoba and her LFA debut but Mazo feel she benefited great from the time off.

“I needed to evolve in my game.” Stated Mazo “I transitioned to the USA and I took the time to get better. I feel like it changed my whole game.” 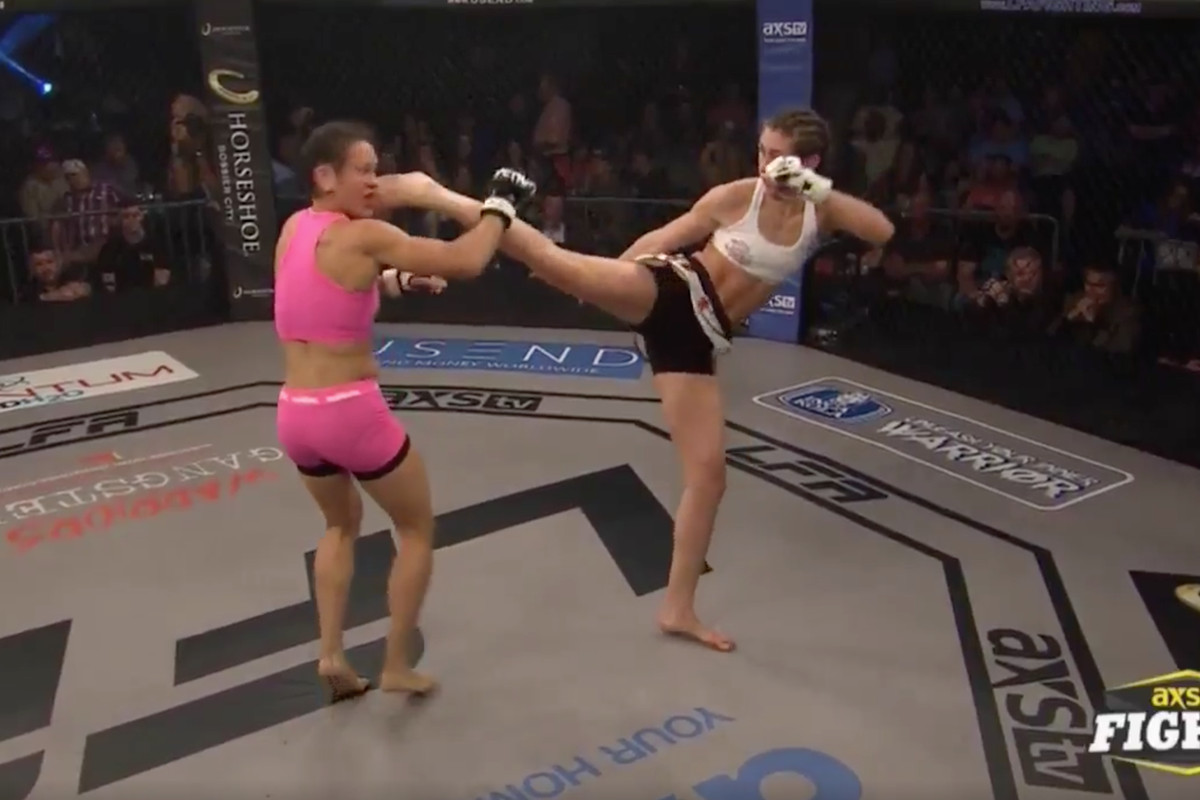 The “Colombian Queen” debuted for the LFA organization last year, pulling off two highlight reel headkick finishes. The performances sparked a lot of interest, but for Mazo, it was just part of the job.

“I did my job and people liked it. That is in the past for me. Now, I focus on my next fight, to have a better fight and a better victory.”

Going into Friday’s LFA 36 card fans expected to see a title fight in the women’s 125-pound division, where Fast rising prospect Sabina Mazo and Brazilian standout Silvana Juárez would do battle. The twist, Juárez was also scheduled to fight a week prior, challenging KSW flyweight queen, Ariane Lipski at KSW 42.

With the scheduled bout under the KSW banner being so close to the LFA event, fans wondered if Juárez would be able to make the quick turnaround. It turns out that Juárez had trouble getting into the country and the fight with Mazo was cancelled last minute.

“She pulled out because of visa issues. LFA notified me and tried to find a replacement,” mentioned Mazo. “I am not disappointed. Things happen and it is part of the game.”

KSW is just one promotion out of many interested in building a legitimate flyweight division. The “Colombian Queen” spoke about KSW 42 and the fight between Lipski and Juárez.

Mazo is not opposed to rebooking the fight with Juárez.

“Yes, if the opportunity comes I will take it!”

With the Juárez bout behind her the 20-year-old Colombian prospect sets her sights on LFA gold once again, as she is scheduled to battle Shannon Sinn at LFA 37 on April 20th for the vacant title.

“She is a complete fighter and I feel great to fight her. I know that we can put on a great fight!” commented Mazo “It can end anywhere. I am ready for every aspect of the fight.”

With an unbeaten record that includes triumphs over 7-1-0 Bellator competitor Alejandra Lara and 9-1-0 fighter, Reina Cordoba, who is the #1 ranked female fighter in Costa Rica, Mazo is one of the hottest prospects on the flyweight circuit. These days there are many opportunities for free agents on the women’s scene. While the UFC is the ultimate goal and first choice for many, the “Colombian Queen” is yet another fighter on the growing list of free agents who are opting to leave their options open and test the market.

“I want to go to the UFC one day, but for now I am focused on the LFA. Maybe if some good opportunities come up with another event I will take it.” Mazo continued “After this fight I want to defend my title then see if I step to the UFC. I will approach it step by step because other opportunities could come.”

Sabina Mazo would like to thank her family Kings MMA, conditioning coach da Rulk, Muay Thai Medellín and the fans who support her and the sport she loves, MMA.

A 16-year supporter of the women’s scene. Host of The MMA Scene Podcast on Anchor and BJJ practitioner.